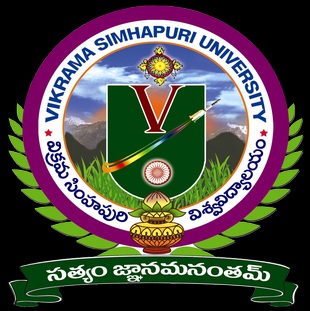 Vikrama Simhapuri University, Nellore, came into being, fulfilling the long-cherished dream of the people of Nellore district, re-christened Potti Sriramulu Nellore district since 2008, by G.O.Ms. No. 89, Higher Education (U.E.II) Department, dated 25.06.2008. This GO makes history in the field of Higher Education in Andhra Pradesh since it paves the way for the establishment of six new Universities in six districts in Andhra Pradesh.

Courses started and their Significance

The courses are designed keeping in view the demand for the subject, scope for the intellectual development of the student within the disciplinary boundaries, the relevance of the course broadly for the region and the nation, employability of the student, and his ability to contribute, through the skills and practical training acquired at the University, to regional and national development and to national wealth.

That Nellore is fast metamorphosing itself into an industrial city with a concentration of major industries around a twenty kilometer zone of the area where the University is going to be located and that the district administration is gearing itself up to prepare an HR Atlas for the purpose are also factors taken into the reckoning in the matter of course design. Thus the perspective is futuristic. Further, a student should evolve himself into a useful citizen contributing not only to the productivity of the nation but also to the promotion and upholding of citizenship values. Hence the focus is on holistic training. the University to exercise its powers of affiliation under the A.P Universities Act, 1991, to bring UG/PG/Professional/Oriental, etc.

Academic panel for the UG program

Academic panel for the PG program

The students will get admission in various PG Course on the basis of VSUPGCET and those students who have cleared this entrance are eligible to appear in the counseling process which is conducted by University at the designated Centres. Students can fill the application form through an online or offline method.

For Ph. D Courses, Applicants have to crack APRCET and followed by an Interview.

For BFA, Diploma and Integrated M.Sc Course, the students shall be selected done on the basis of merit followed by document verification.

The University currently, is offering 10 courses
2 Regular courses and two PG Diploma Courses are being offered from this year 2012.
* PG Diploma courses are

Ph.D. Programmes were started in 2010 in Six Departments

It is proposed that Research Supervisors from Affiliated Colleges will also be entitled and enlisted for guiding the Ph.D. students in the ensuing notification. The University has launched Ph.D. programs in Eleven disciplines, namely, Computer Science, Business Management, Biotechnology, Chemistry, English, Commerce, Economics, Physics, Zoology, Marine Biology, and Social Work, with effect from the academic year 2010 -11. The Ph.D. programs are entirely in conformity with the latest UGC guidelines as contained in the UGC (Minimum Standards and Procedure for Awards of M.Phil/Ph.D. Degree) Regulations 2009 and admissions were made by conducting an Entrance Test and through a viva.

VSU RESET 2012 has been conducted with an addition of five subjects: English, Commerce, Economics, Physics, Zoology.

Sri Potti Sreeramulu Nellore District is the jurisdiction of the University. Vikrama Simhapuri University was, to start with, a unitary University. Giving the University a full-fledged status, the Government of Andhra Pradesh, in a letter from the Principal Secretary to Government, Higher Education Dept. No.9855/UE-II/2008-4 dated 09.04.2010, has authorized the University to exercise its powers of affiliation under the A.P Universities Act, 1991, to bring UG/PG/Professional/Oriental, etc., colleges in Sri Potti Sreeramulu Nellore district under its jurisdiction from the academic year 2010 – 11. Thus 126 colleges hitherto affiliated to Sri Venkateswara University have been brought under the fold of Vikrama Simhapuri University, Nellore with effect from the academic year 2010 – 11.

Sri Potti Sreeramulu Nellore District is one of the nine coastal districts of Andhra Pradesh situated in the southernmost point. It lies between 300 -25m and 150-55m of the northern latitude and 790-9m and 800-14m of the eastern longitude. The boundaries of the district are the Bay of Bengal on the East, Veligonda Hills separating it from the Kadapa District on the West, Prakasam District on the North, and Chittoor District and Tamilnadu on the South. It spreads over an area of 13,076 sq km and this accounts for 4.7% of the total area of the State.

In the light of the rapid industrialization and the establishment of the Special Economic Zones especially in the sectors of textiles and tannery products, Vikrama Simhapuri University has started courses of study which are relevant to the region, which integrate work skills with the curriculum, and which strives to promote the employability of the students.

Name of the College and Address

Vikrama Simhapuri University was founded in 2008, affiliated by under the A.P. Universities Act, 1991

The university is located in Dargamitta, Nellore, Andhra Pradesh.

Vikrama Simhapuri University to develop the practical training and skills acquired at the University.